It is responsible for 2.9% of all automobiles manufactured worldwide in 2017

The Spanish Association of Automobile and Truck Manufacturers (ANFAC) and the International Organization of Motor Vehicle Manufacturers (OICA), to which it belongs, have published the worldwide production figures for 2017. Last year, manufacturing grew by 2.4% compared to 2016, reaching 97,302,534 vehicles worldwide.

Rises and falls that do not affect the ranking
At the top of the list, China remains beyond reach, with over 29 million and growth of 3.2%, while the United States, in second place, saw production fall by 8.1% (over one million units) to 11.2 million.

Japan (third), India (fifth) and Mexico (seventh) showed significant growth, while Germany (fourth) and South Korea (sixth) both took a step backward that did not affect the ranking. The greatest growth happened at ninth place, held by Brazil, of no less than 25.2% adding 500,000 to the pervious year's figure and which, at close to 2.7 million vehicles, puts Spain's eighth spot in jeopardy.

From its tenth spot, France, with 6.5% growth, is also approaching Spanish production figures thanks to the reforms being implemented by President Emmanuel Macron's government. In 2017, Spain's neighbor produced 2,227,000 units.

Distribution by continent
With four countries among the six top manufacturers, the Asia-Pacific region remains world leader in vehicle production, with an overall figure of 53.5 million units produced. This means that 55% of all vehicles were manufactured in this region, with growth of 3.3% compared to 2016.

Europe is the second producer in this division by continents, with three countries among the top ten manufacturers: Germany, Spain and France. Factories in the Old World produced 22.1 million vehicles in 2017, 3.1% up on the previous year and 23% of the world total.

In fourth place lies Africa, which barely reached 0.9% of worldwide production, with 0.93 million vehicles and growth of 3.1% compared to 2016. 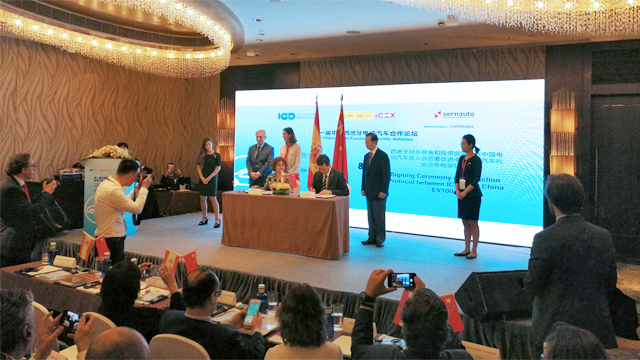 ICEX-Invest in Spain and China EV100 sign a protocol to incentivize the collaboration ...

The automotive industry reinforces its commitment to Spain