Turismoi was started in Peru in 2014 with a business model consisting of a marketplace that generated traffic to companies in the travel sector, through a proprietary tool that was personalized for each customer. The model soon began to evolve and its success brought it to Spain, where it has established its head office and begun to capture major international investments.

How has Turismoi changed from its beginnings?
We started up in Peru in 2014 as a model of marketplace that generated leads (identification of potential clients) for tour companies. These leads were managed in a CRM which we had created for these companies. We saw that this was not the way to be able to scale massively, as these companies needed to receive confirmed sales. So we changed to the current model: a management software for stock and content that we provide free to tour companies. We link this content and stock through APIs and widgets (mini applications) to distribution channels like online travel agencies (OTA), marketplaces, media websites, transport companies, hotels etc.

When did the company arrive in Spain and with what objective?
The company arrived in Spain in 2015. We created the holding company in the country and it became owner of 100% of the operating company in Peru. In Spain we first obtained financial support from investors like Top Seed Labs, who opened the door to a new network of contacts like the Spanish Government's Tourism Secretariat (Segittur), business angels, and others. The latest initiative we've closed was an investment round with a Spanish venture capital fund called Axon Partners Group.

You've received several awards and distinctions in Spain. Which are the most important?
In 2014 we won the Venture Day organized by the IE Business School in Madrid. Then in 2016 we received funds from Segittur, and in 2017 we were selected from among the 100 best startups (12 in the travel sector) in the South Summit held in Madrid.

How much has Axon Partners contributed and what have you invested it in?
The amount of the investment is confidential, but it's over one million euros. We 'are still drawing on these funds to develop technology and for our international expansion.

What investment has Turismoi made in Spain and how many jobs has it created?
We have made all our investment for technology development in Spain. Since 2015 we have created approximately ten jobs.

What type of customers do you serve?
Over 180 tour and activities companies in Spain are using our platform to distribute their services in various commercial channels. We are constantly seeking new sales channels.

What projects do you currently have underway and what are the upcoming challenges?
We are currently in the process of expanding the platform to different markets in Latin America and constantly on the lookout for new sales distribution channels worldwide. 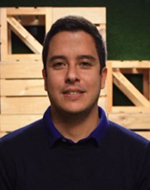