Its commitment to Spain is key. Its Spanish production plants are the source of such emblematic products as acetylsalicylic acid to prepare the famous Aspirin®, which is produced in Asturias for Bayer around the world. Another world reference is the Berlimed plant in Alcalá de Henares, which manufactures soft gelatin capsules. In terms of research, in addition to its collaborations with public and private institutions, it has six of its own R&D centers which focus particularly on the agricultural sector.

When did the company start up in Spain and why?
Our presence in Spain dates back to 1899, when the company “Federico Bayer y Cía." was constituted in Barcelona for the sale of colorings. Since that time, Bayer has established an industrial fabric in Spain with major production and research centers and offices throughout the whole of the Iberian Peninsula.


What infrastructure does it have in Spain?
Our main offices are located in the town of Sant Joan Despí in Barcelona, but our structure extends throughout the whole of the country.

We have three major production centers that are a reference for the organization worldwide. In addition to those already mentioned in Asturias and Alcalá de Henares that serve the healthcare area, we have a plant specializing in phytosanitary products in Quart de Poblet (Valencia).

Three are in Almería and are dedicated to the development of genetic improvements in conventional greenhouses; the R&D space in Murcia focuses on developing improvements in open-air cultivation of crops such as broccoli, cauliflower, lettuce, tomato, melon etc.; and finally in Brenes (Seville), we have an experimental station for agronomical development in the field of future innovative developments for the protection of Mediterranean crops, thus contributing to a modern and sustainable agriculture.

How much has it invested in Spain in recent years and with what objective?
Bayer is firmly committed to its investment in Spain. In 2018 the company invested a total of over 37 million euros, of which 11.8 million were dedicated to infrastructures and around 25 million to the research and development sectors. This figure once again exceeded that of previous years, representing the best evidence of the company's commitment to Spain and to innovation as an engine that drives our development and future outlook in the different areas.

What are its upcoming challenges in Spain?
Bayer has a track record in Spain of being passionate about research with a purpose. Throughout our 120 years in the country we have actively contributed innovative solutions in the different areas where we have been present. Today we reiterate out pledge to continue working to tackle some of the greatest challenges facing the world in the areas of healthcare and food.

The growth of the population in the coming years and the increased life expectancy are just two examples of the transformation we are experiencing, and calls for immediate work to be done to find solutions. We rely on our research and development to continue providing solutions for the future. After all, as an example in clinical health research, Spain is the second country within the Bayer organization in number of tests, and the first in Europe. We participate with projects in all the medical areas in which we are present, and make a particular contribution in the area of oncology and pediatric research, where we are involved in all the tests the company currently has in progress. 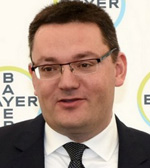 This year Bayer is celebrating its 120th anniversary in Spain, where it has almost 2,000 employees and R&D production centers all over the country