Brahm Spain is an Indian company engaged in the machining and assembly of all types of iron, steel, aluminium, titanium and other metal components. Its activity in Spain includes the manufacture of more than 600 parts for motor and industrial vehicles, agricultural machinery, and defence and household product industries, among others.

Land Rover Santana was created in Spain in 1979, and five years later it embarked on a joint venture with Suzuki. After the acquisition of 100% of the company in 1989, the Japanese firm transformed it into Suzuki Motor Spain. In 2005 it decided to cease its operations at the plant, which was then sold to Sams, a Spanish company. The Indian industrial group Brahm arrived in Spain in 2017, when it acquired the majority of the company's shares and incorporated it under the name Brahm Spain.

What was Brahm's situation when it arrived in Spain?

The Brahm group had three plants in Aurangabad, India. When it decided to expand and internationalise its activities, it acquired the plants belonging to Sams (now Brahm Spain) and Samm (the subsidiary opened in Mexico by the Spanish group in 2008, now Brahm Mexico). This purchase allowed it to make the leap to Europe and America, as its business previously was only in Asia. It also acquired a new customer portfolio to which it can offer a comprehensive service worldwide.

What investment did this purchase represent?

Brahm arrived in Spain at a time when Sams was in a precarious situation, with little in the way of financial resources. The Indian group made a six-million euro capital investment, and also invested to expand the workforce, which has grown from 102 employees in 2016 to 175 today, with an average age of 37.

What infrastructure does it have in Spain?

Brahm is located in Manzanares (Ciudad Real), where it has facilities covering 12,000 square metres, and another 18,000 square metres intended for  expansion. We have 80 CNC machines and about 500 manufacturing and control units. We also have an R&D team of design engineers and an engineering and quality department.

How has the company evolved since Brahm's arrival?

Since it arrived in Spain, the company has made a change to the management. In addition to giving us financial muscle, we have implemented lean management, a concept of ongoing long-term improvement with minor gradual changes in our processes in order to improve efficiency and quality. We also launched a 2020-2025 business plan in early 2020 aimed at enhancing digitisation and investment in R&D, renewing our business strategy and machinery, replacing employees due for retirement with better qualified personnel, and seeking to obtain recognition of our world-class performance among our customers.

And do you have any new investments planned in the production area?

Yes, we are going to expand our current facilities due to lack of space. In 2021 we will invest one million euros to build a 3,000-square metre logistics warehouse that will allow us to optimise our flow of material. This will free up our current logistics area so it can be dedicated to production. In fact, we already have a two million-euro investment in place for a new fully automated machining line with artificial vision control, for use on a project for Renault. We will also invest one million euros in a machining line for Caterpillar.

How important is Spain in the company's strategy?

Since 2020 the Spanish company has led the group in terms of sales, with 22 million euros a year, ahead of the 20 million euros in India and ten million euros in Mexico. This has meant that we can take corporate control in areas such as quality and operations, and it allows us to continue creating skilled jobs.

Are you currently recruiting?

Obtaining employees for such specific positions is a challenge for us because of our location, in the heart of La Mancha. The profiles we need most are mechanical engineers and designers of production and control systems. We are looking for engineers who are familiar with the APQP (Advanced Product Quality Planning) methodology, and engineers with specific knowledge of the IATF (International Automotive Task Force) international standards for our quality department. They must all have an advanced level of English, since this is the language used by 95% of our customers in all their communications. We accept applications on our website and at curriculum.bppcs@brahmcorp.com.

This use of English suggests a high export rate

You have also received support from ICEX

Brahm has received support from ICEX in three RD&I projects. The most recent was Caterpillar's Mounting Cooler project, which was completed in 2020. In addition, with ICEX's help we were able to set up and expand our R&D department, which currently serves the Mexico and India offices. The reinforcement of this department led to the implementation of technological improvements that helped the company optimise its resources and improve its productivity. Digitisation was implemented in all lines, taking industry 4.0 one step further. Brahm Spain is now more competitive and effective, which will allow it to pursue its growth plan on the international landscape. 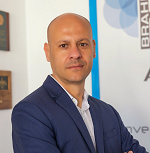 98% of production in Spain goes for export, and turnover already exceeds the Indian parent company's