A growing, dynamic and innovative industry

With over 119 billion euros in turnover (2% of GDP) and a labor force of nearly 500,000 people, agri-food is the main activity in Spain’s manufacturing industry.

Spain is the fourth agri-food power in Europe in turnover, after France, Germany and Italy, accounting for 9% of the European agri-food industry value added.

By sub-sector, meat with 26%, leads the food industry in Spain, followed by the beverage, fats and oils, and fruit and vegetable processing sectors

In Spain, the consumption of agri-food products per capita has increased significantly in the last year, returning to 2015 figures and amounting to 1.5 billion euros per year. Spanish consumers tend to buy fresh products like meat, fruit and vegetables and fish. Dairy products are also bought regularly. 76% of purchases are made at superstores, supermarkets or discount stores. The online channel (even at 1.2% of the total) is experiencing substantial growth.

The agri-food industry shows tremendous dynamism at the international level with 11 years of trade surplus, more than 31,000 companies and over 30 billion euros in exports.

The Spanish food industry’s very notable entry into the international market accounts for 9.3% of total EU-28 exports. France, Germany, Italy, Portugal, the UK, the United States and China are among the 10 countries that consume Spanish food the most.

Finally, tourism and gastronomy are very important to the industry. Spain is a tourism powerhouse that attracts more than 83 million visitors who, along with national consumers, result in 253,444 food and beverage establishments.

Spanish gastronomy, thanks to innovation, is internationally renowned, a fact that is evidenced by Spain having more restaurants among the top 50 worldwide, than any other country. 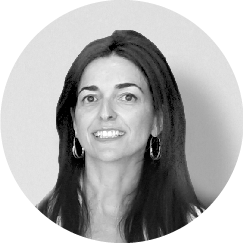 Why invest
in Spain’s
agri-food industry?

The industry plays a crucial role in the Spanish economy and is the main activity in the country’s manufacturing industry.

The development of the Spanish food and beverage industry has been more pronounced, as regards Spain, than the European average.

Along with the ample amount of food products consumed in Spain, and reinforced by tourism, is the European market.  Spain is the fourth largest exporter of agri-food products in the European Union, behind the Netherlands, Germany and France.

With modern infrastructures, Spain is the gateway to Europe, North Africa and Latin America.

The Spanish government, through the Ministry of Agriculture, Fisheries and Food, has developed the Program for Sustainability in the Agri-food Industry.

As a key industry for the Spanish Economy, the agrifood sector benefits from ample aid and incentives at the regional, state and European level.

According to Eurostat data, Spain is the leading country in the European Union in area devoted to organic farming (2.1 million hectares), and the fifth largest producer in the world.

The area in Spain devoted to organic farming has increased by 14.9% in recent years.

In organic industry structure, there are more opportunities in the production of foods of animal origin, which is less developed, than in food products of plant origin.

There are estimated to be more than 41,000 agents in the market involved in this subsector, including farmers, industries and vendors.

At the distribution level, major chains in Spain have already entered this segment, and account for 40% of the total.

The Spanish Ministry of Agriculture, Fisheries and Food is promoting the organic farming industry as a priority. 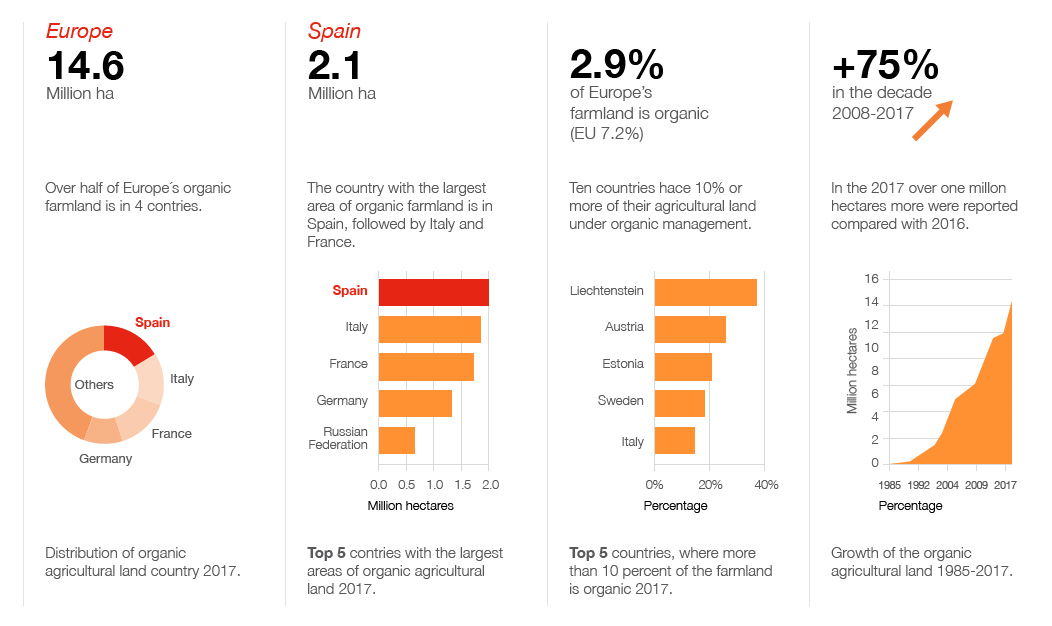 Spain is the country with the largest proportion of GDP from agriculture (2.7%) in the European Union.

After France, it is the European country with the largest agricultural area (13.3% of the total) and the fourth in number of farms (8.9% of the total). It employs 750,000 people (4% of the country's employment)

By región, the three most important autonomous communities in value of agricultural production are Andalusia, Castile-Leon and Castile-La Mancha. The main agricultural products are cereals (barley, wheat and corn), olive groves for mills, vineyards, sunflowers for industrial use, fruit trees (mainly almond, orange and tangerine) and vegetables, in that order.

needed in the industry to increase productivity, improve efficiency and adapt production, is a great investment opportunity.

Leading regions
for the agri-food industry

Hero España has donated over 30 tons of food to help the groups most disadvantaged by the pandemic crisis. ...

Agrifood is one of the sectors that has remained most active during the crisis caused by the COVID-19 coronavirus pandemic. Its ...

The company chose Toledo as the location for its factory for several reasons, including the skilled workforce ...

Oskri started up in Wisconsin (United States) in 1999, specializing in the production of healthy snack bars prepared with natural ...

It has invested 50 million euros in its factory in Tenerife and buys tobacco leaf from Extremadura to ...

Spain is important to Japan Tobacco International (JTI), as evidenced by the 50 million euro investment it has made in its Tenerife ...

With 650 restaurants in Spain, Burger King generates around 18,000 jobs in the catering sector

Burger King has been in Spain for 40 years. Why did the company opt for our country?Burger King was set up in Miami on December ...

24.9% owned by the Colombian firm Expocafé, the company expects to announce new products in the coming ...

Present in the market for a quarter of a century, Supracafé produces 365,000 kilos of coffee a year –about 50 million cups of ...

ICEX and Eatable Adventures will promote the internationalization of the Spanish foodtech sector and ...

Presentation: Programa Rising Up in Spain in Italy

ICEX-Invest in Spain, in collaboration with the Economic and Commercial Office of the Embassy of Spain in Milan, organizes the presentation of the Rising Up in Spain program among Italian startups on January 26th.

ICEX organizes the webinar 'The Spanish FoodTech sector - Status and opportunities for its internationalization 2021' in which it will be presented the annual report of the sector. 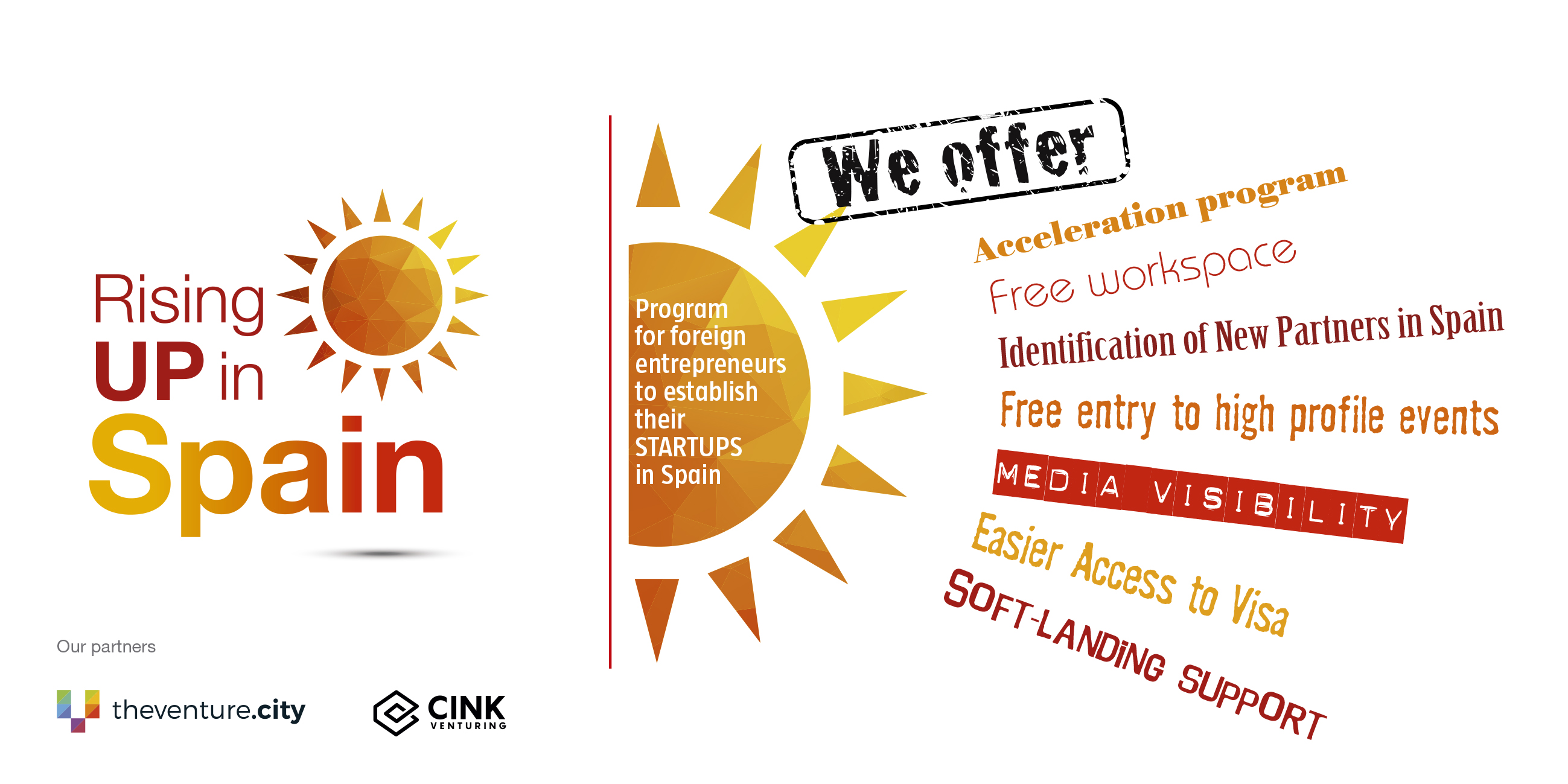 From idea to innovative business model: How to get starte ...

ICEX-Invest in Spain, in collaboration with the Economic and Commercial Office of the Embassy of Spain in Berlin, organizes the event 'From idea to innovative business model: How to get started' on February 2nd.