Easyjet opens third base in Spain 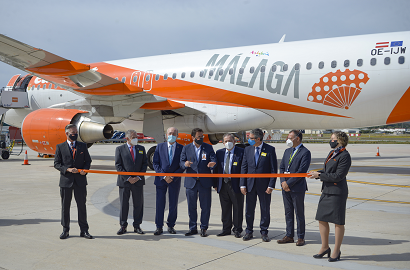 The airline easyJet opened a new airbase at Malaga-Costa del Sol airport this month to better respond to the increase in demand as European countries gradually reopen for tourism. It now owns 12 aircraft in Spain and employs more than 400 people under local contracts. The Malaga base joins the ones that already exist in Barcelona and Palma de Mallorca and will create almost 100 direct jobs for pilots and crew members. easyJet is the second largest airline in Malaga and following the announcement of a new route to Birmingham (from 29 June to 30 October) it now offers up to 14 routes to some of the leading destinations in Europe, such as London, Berlin, Geneva, Paris and Amsterdam.

"With more than 36 million passengers transported since 1999, Malaga was the most popular destination in our network that did not yet have a base," explains Javier Gándara, easyJet's Managing Director for Southern Europe. Despite this being a time of challenges for the industry, "we believe that opening what will be our second seasonal base in Spain -and the third in Spain- is an opportunity to expand in the country, where we are the fourth largest airline", he adds. The seasonal base provides a solution tailored to market needs, and "is another example of an innovative initiative that makes our business model more efficient".

According to the mayor of Malaga, Francisco de la Torre, the very opening of this new base in Malaga creates local jobs, "and it is also a clear indicator that the airline is committed to the destination, has growth expectations and invests in it. In fact, we hope that it will evolve from a seasonal to a permanent base over the course of the year." The year before the pandemic, easyJet was the second largest airline in Malaga with 14 routes and 2.5 million passengers. De la Torre stresses that "it is not by accident that one of our Air Connectivity strategies, included in our Strategic Tourism Plan for Malaga 2021- 2024, involves working together with other institutions and the airport so that companies see this airport, the city of Malaga, its province and the extensive hinterland that surrounds us as a strategic place to base their planes, even beyond the tourist field".