The world's most innovative companies occupy 430,000 square metres of office space in the Madrid Region

The report analyses the impact of these companies, considered the most innovative in the world, on the real estate market in Madrid. Apple, Tesla, Alibaba, Facebook, Nike and Coca Cola are among the 55 companies assessed, to name just a few. Almost all, 51 to be precise, have offices in Madrid, while 18 have industrial and logistics activities in the region and 17 have retail premises. 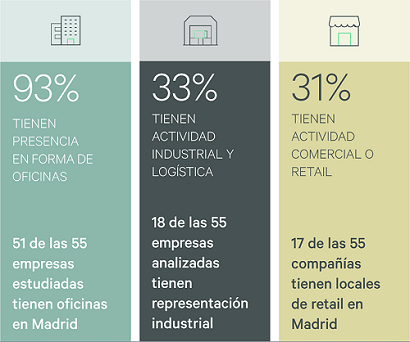 Office area
Most of these companies are tech companies providing advanced business services, and some of them also have a presence in the industrial and commercial sectors. They occupy over 430,000 square metres of office area in Madrid. More than half of the companies are technology-based, followed by the pharmaceutical and manufacturing sectors.

The group of companies analysed generates around 52 billion euros in annual revenue across Spain. Although the report does not detail how many of these companies are based in Madrid, it indicates that 77% of this revenue, 39.7 billion euros to be precise, is generated by companies whose Spanish headquarters are located in the capital.

According to Paloma Relinque, Director of CBRE in Madrid, this figure demonstrates "the great importance of the capital within the Spanish innovation framework. Their revenue corresponds in magnitude to about 4% of Spanish GDP".

Balanced distribution
The areas with the highest concentration of offices occupied by the 55 most innovative companies in the world are located around the A-1 and A-2 motorways and inside the M-30, although the distribution is generally very balanced.

Specifically, more than 25% of this office area is located in the inner ring of the capital, mainly occupied by technology and retail companies (91%). The A-1 highway reaches another 25%, and brings together various sectors, although technology (38%) and the automotive sector (25%) are most prevalent. Another 21% of square metres are occupied by these top 55 companies in the A-2 area, half of them in the manufacturing sector and 34% of the total in pharmaceuticals.

Centres of attraction
For David García Núñez at MWCC, "the presence of these companies in cities is no accident, but is in response to the existence of a series of factors that facilitate the emergence of ecosystems acting as centres of attraction for companies".

According to the CBRE and MWCC report, Madrid’s per capita income - which is 34% higher than the EU average - are among the factors that help the city to be a business and innovation hub. It also highlights the above average growth of the region in Spain and amongst all other EU countries in the period 2008-2018. Finally, the document highlights the talent and weight of the services sector, with 200,000 students in prestigious universities and accounting for 88.6% of the Spanish economy..