At the end of October, Scopely acquired the Sevillian company Genjoy, a company that specializes in puzzle video games (also known as "Match-3" games in the sector's jargon). Therefore, it adds an office in Andalusia to the two offices in Barcelona, as well as 150 employees, to a workforce of 400 employees, quite a feat when we compare these figures to the ten employees of the Spanish offices that joined the company in 2017.

Not even a year ago, company entered the select club of unicorn companies, for its $1 billion valuation. It recently gave another step forward in its growth strategy after raising $340 million in Series E, achieving a $3.3 billion valuation.

The company's commitment to the Ciudad Condal continues to be firm. Established in 2011, Scopely has become one of the leading companies in the interactive entertainment and mobile video game sector. The base for its differentiation is a robust technology platform and a publishing infrastructure that allows it to replicate its successes consistently. In addition, its success is based on a global team, which covers all game creation and publishing disciplines.

Why did you pick Spain as the starting point for your European growth strategy?
The company's constant growth drove its European expansion strategy, opening an office in Barcelona in 2017. In 2019, it extended its presence by opening a new office with a surface area of over 2,400 m2. Scopely chose Spain for its talent in the technology, engineering and video game areas and for its leadership as a corporate hub for technology and game industry companies. In fact, the company increased its Spanish workforce in the engineering, game design, data analysis, creative services and customer service areas, among others, with the aim of continuing to grow and to develop new technologies and video games. Scopely has continued to invest in the region, with the recent acquisition of a studio that develops Match-3 games, adding 150 employees and the Genjoy office in Seville to Scopely's global presence. We currently have 400 employees in Spain.

What led you to strengthen your commitment to Barcelona after opening your technology center?
Adding this second office in Barcelona in 2019 strengthens the company's commitment to Spain and establishes it as the first hub for mobile video games. The growing presence of the company in Spain is a huge opportunity for video game industry professionals, who can now work for a global leader like Scopely. We are committed to Spanish talent of the video game industry and we currently have many vacancies in Barcelona, with plans to continue increasing the workforce in the upcoming months.

How has this center performed during its first year of operations?
This has been quite a challenging year and we could not be prouder of how the Scopely global team has worked, united and stronger than ever. Our teamwork and dedication has demonstrated that our people has been a key factor for our successes this year. We are fortunate of having managed to build a resilient and long-lasting business that has continued to grow over the 12 months and which is expected to continue to grow, since the interest and demand for interactive entertainment and mobile games continues to increase.

What is Spain's role in Scopely's strategy?
Spain plays a key role in Scopely's European expansion strategy. We believe that the highly-qualified talent we attract here and the solid position we are building will motivate professionals from other countries to join us in Spain and help consolidate our position here as a center of technology and innovation in the mobile video game industry.

What is your customers' profile?
We have a game for every player, from casual games like Scrabble GO to our strategy role games, such as Marvel Strike Force, or MMOs, such as Star Trek Fleet Command. Each video game has its own vibrant and unique community.

What are your upcoming challenges?
We continue to grow our video games and franchises live to turn them into more immersive and attractive experiences. In the spring of 2020, we launched Scrabble GO, one of the most popular games in the world. This upgraded version of the classic board game is developed and maintained by Scopely's team in Barcelona. In addition to growing existing video games live, we also have various interesting projects in the pipeline. With our new Genjoy studio in Seville, we will escalate our Match-3 list and prepare to compete with some of the most important video games in the category. 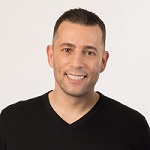