Why Spain Barometer of business climate

According to the "Barometer of the Business Climate in Spain from the Foreign Investor's Perspective" drafted by ICEX, Foreign Multinationals for the Spain brand and IESE Business School

The expectations of foreign investors as to the close of this year and the upcoming term are clearly positive and improve compared with 2017. These continue to show a growing optimism concerning forecasts on investment, turnover, employment and exports, as revealed in the eleventh edition of the "Spanish business climate barometer from the perspective of foreign investors".

This publication was completed together with ICEX-Invest in Spain, Foreign Multinationals for the Spain brand and the IESE International Center for Competitiveness.

The 2018 Barometer was presented on Monday at the Ministry of Industry, Commerce and Competitiveness, in a event that analyzed its most important aspects and main results. Taking part in the event were Xiana Méndez, Secretary of State for Commerce; María Jesús Fernández, Executive Director of ICEX Invest in Spain; José María Palomares, President of Foreign Multinationals for the Spain brand; María Coello de Portugal, Director of Institutional Relations at IESE Business School; and María Luisa Blázquez, Associate Researcher at the International Center for Competitiveness at IESE.

Xiana Méndez highlighted during the presentation that “Today, Spain's economy is much more open, more competitive and, therefore, less vulnerable”. “Spain's attractiveness for foreign investment not only resides in the opportunities presented by an economy that's growing above the world's leading developed economies, but also by the fact that Spain is perceived as a destination for investments of high added value and as a platform for investing not only in terms of the domestic market, but also for expanding to third markets”, she added during the presentation of the 2018 Business Climate Barometer.

Future outlook
The most important area for investors in the present edition, as in previous years, was Human Capital, followed by Market Size. Other areas significant for their relevance are Infrastructures, Labor Market and Quality of Life.

This edition of the Barometer gathers the opinions of 520 foreign companies on the evaluation and importance they attribute to the Spanish business climate in 2018.

Likewise, it includes their perspectives for the coming year. It identifies –in the medium term– both the strengths that must be maintained and the main spheres of action requiring greater efforts.

The eleventh edition of this "Barometer of the Business Climate in Spain from the Perspective of the Foreign Investor" is based on surveys completed between May and June 2018.

Spain, an attractive country for investment
According to the Investment Registry at the Ministry of Industry, Commerce and Tourism, the total foreign direct investment received by Spain in 2017 was up 1% to over 36 billion euros. This trend continues in 2018. In the first semester of the year, Spain received over 18 billion euros in foreign investment, 21% greater than the same period in 2017. This figure is the highest Spain has received in the last 10 years. In fact, according to data from the UNCTAD, Spain is the 8th largest global receiver of foreign investment stock in the first half of 2018.

Guide to Business in Spain 2018
During the event also was presented the Guide to Business in Spain 2018, drafted by ICEX-Invest in Spain in collaboration with Garrigues, the main new developments in which were analyzed by Vicente Bootello, partner at the Taxation Department of the law firm and coordinator of the Guide, and María José Morales, Counsel for the Administrative Law, Urban Planning and Environment Department at Garrigues. 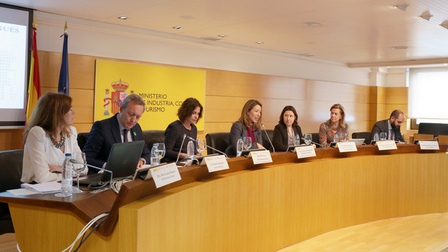 Over 90% of foreign companies in Spain expect to increase or maintain their ...

Foreign companies in Spain forecast a "clear improvement" in their activity ...