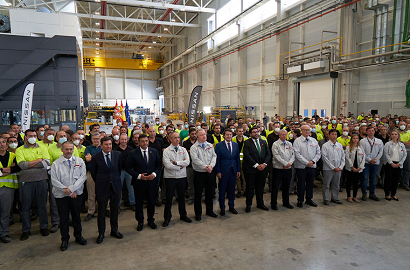 The company’s investment in the new factory in Ávila will increase to 55 million euros, and a further 40 million euros is destined for the Cantabria plant

The new head of Nissan's Ávila factory, Nuria Cristóbal García, took up her position at the beginning of July with the opening of the stamping plant that the facility has been equipped with as part of the transformation plan approved in 2017. The company has also inaugurated a moulding line at its Cantabria plant, as part of its 2020-2023 ultra-competitiveness plan.

The new plant in Ávila now covers 23,000 square metres, compared to the 11,000 square metres initially planned. It consists of a new stamping line and a plastic injection moulding machine which will enable the factory to increase its production capacity.

New warehouse
The 2017 transformation plan was allocated a budget of 40 million euros, to which a further 15 million euros will be added before the end of this year. Supplemented by state aid, this has also permitted the construction of a new 21,000 square metre warehouse next to the factory, which will improve its competitiveness and reduce logistics costs. Work on this began in November 2021.

The Ávila plant currently produces parts for more than eleven models produced by Renault and Nissan, which form an international alliance together with Mitsubishi. It will now also take on a joint project with the Renault Retail Group to fit out multi-brand used vehicles for subsequent sale.

1,700 jobs
Kevin Fitzpatrick, Senior Vice President for Manufacturing and Supply Chain for the AMIEO region (Africa, the Middle East, India, Europe and Oceania), explained, "Nissan is making a major commitment to Europe, which will lead our global move towards electrification, and we will maintain a strong presence in Spain with the industrial plants in Cantabria and Ávila, as well as all the brand's commercial activity, Nissan's technical centre in Barcelona, the purchasing function, the logistics centre and the spare parts warehouse, which together account for over 1,700 jobs in Spain".

For her part, Nuria Cristóbal expects to recruit a full workforce at the Ávila plant by 2023, up from the current 350 employees. She said, "We’re not only manufacturing metal spare parts, but also new parts, and we have been looking for new projects and business opportunities. We’ll soon be manufacturing the suspension structure for a new alliance model, which will represent Nissan Ávila's first production of vehicle components, thereby moving beyond the spare parts business. This is in addition to the production of replacement bumpers for Nissan, which means that we will become a hub, and an industrial centre for alliance bumpers in southern Europe".

Moulding line in Cantabria
The launch of a new moulding line at the Los Corrales de Buelna (Cantabria) plant, which employs 500 people, represents a 10% increase in production capacity, a reduction in manufacturing costs, an improvement in energy efficiency and an 18.5% reduction in energy costs. The 40 million euros invested to date amounts to 75% of the budget earmarked in the 2020-2023 ultra-competitiveness plan.

The Cantabrian plant produces over 800,000 steering knuckles per year for the North American market. Thanks to the new line, the manufacture of parts this year will also include the Nissan Sendra model in the Mexican market, plus other products for its client John Deere, increasing the factory's turnover by 3%.

Plant Manager Jorge Alonso said, "We’re involved in an exciting and challenging project that will ensure the factory's competitiveness and sustainability in the medium and long term. The objectives are clear: to increase turnover, modernise technology and improve plant performance.”