Brexit is not affecting British investors' commitment to Spain

Since November, British companies have invested over €3.89 billion in our country, a record and higher than the historical average.

The United Kingdom's imminent exit from the European Union is not affecting British investment in Spain, which in 2017 reached a new all-time high. 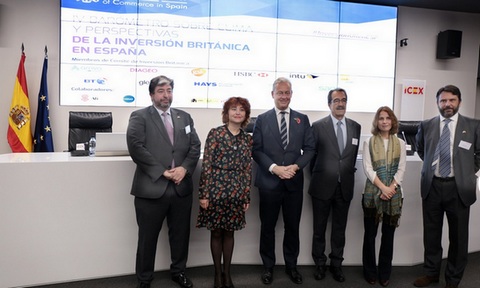 This is one of the main conclusions of the fourth Barometer on the Climate and Outlook for British Investment in Spain, an annual report prepared by the British Chamber of Commerce in Spain and Analistas Financieros Internaciones (Afi). It was presented on Thursday at the ICEX-Invest in Spain headquarters. The report puts the investment flows from the United Kingdom to Spain at over €71.2 billion over 25 years.

Since November, and with the threat of a Brexit without an agreement, British companies have continued their commitment to Spain. Over the year, British investment reached over €3.8 billion, higher than the annual historical average, and consolidating its position as the biggest European investor in Spain. These figures demonstrate the UK's commitment to Spain. It has risen from sixth place in 2015 to second place as global foreign investor, with only the United States above it.

Simon Manley, the British Ambassador in Spain, welcomed these excellent figures, commenting that "they demonstrate the hundreds of British companies that have between them invested around €50 billion in the Spanish economy, creating jobs, opportunities and growth in Spain," adding that "this trade relationship is something of which we feel proud and we are determined to see it grow in the future."
The new CEO of ICEX, María Peña, said that the figures for British investment are "great news that demonstrate both countries want to continue to be trading partners, despite the uncertainty over the UK's future with the EU." "They are natural partners with a similar approach to upcoming challenges," concluded Peña.

The latest cumulative figures for the stock of UK investment in Spain in 2016 reflect that the growing trend has extended since 2013. The United Kingdom accounts for 13.1% of total foreign direct investment (FDI) in Spain, at more than €49.8 billion, an increase of more than €6.3 billion in 2016.

Increased British investment in Spain over the last three years has undoubtedly contributed to the country's economic growth and improved prospects in a number of sectors and regions. From 2013 to 2016 the stock of FDI increased by more than 60%.

Brexit no check to investment

Nearly two thirds of British companies in Spain plan to increase their investment here. Of these, 80% will do so within a year. Moreover, British companies consider that leaving the EU will not involve divestment in Spain by parent companies in the UK; and a small number even considers that Brexit could be an opportunity for Spain to attract more British investment.

Future investment will focus on innovation to achieve new ways of working and to extend business lines. By autonomous regions, Madrid and Catalonia will be the main destinations for investment.

Madrid, the Basque Country and Catalonia, the main destinations. Madrid has continued to lead the list of destinations for foreign investment over the last five years. Since the economic recovery became a reality in Spain, the Region of Madrid has received €6.3 billion; followed by the Basque Country, at €1.90 billion; and Catalonia, at €1.2 billion.

In terms of employment at national level, British investment is responsible for maintaining more than 187,000 direct and indirect jobs, accounting for 1% of total employment in Spain.

Spain: a good place to invest

Quality of life, conditions for finance and supplier costs are the areas valued most by British companies; however, on the negative side, Spain continues in to score particularly badly on the ranking in terms of government investment and commitment to R&D, political risk and instability and relations with the public administration.

This Barometer was commissioned by the British Chamber of Commerce in Spain. It aims to become a benchmark for assessing the current business climate in Spain and the outlook for the British companies established here. Currently attracting foreign direct investment is key for Spain to maintain its international competitiveness, and the United Kingdom is one of the major investors in the country.